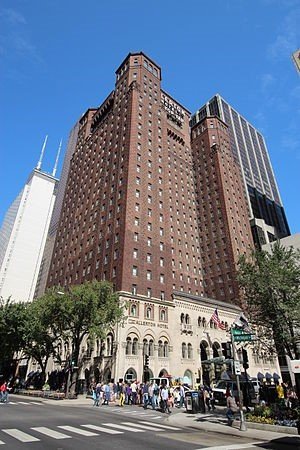 Northern Architectural Systems loves to help connect the Past to the Present.

The landmark Allerton Hotel opened in 1924 as a residential “club hotel.” Downtown Chicago during the roaring 20’s saw Michigan Avenue become a chic boulevard of clubs, shops, and hotels as developers sought to transform the area into the Champs Elysées of the United States. The Allerton was one of the first high-rises on North Michigan Avenue. It was designed to cater to single young men moving to large cities for white-collar jobs. In addition to their living quarters, residents could enjoy libraries and lounges, as well as a private dining room, grille room, barbershop, pharmacy, solarium, miniature golf course and gymnasium with squash courts

By the 1940’s, The Allerton established itself as one of the city’s most exciting social hot spots. The Tip Top Tap, a cocktail lounge with striking views of the skyline, became a popular after-hours entertainment spot. A notable sign advertising the lounge has proclaimed its existence for decades even though it closed in 1961. Star performers included Bing Crosby, Bob Hope, Frank Sinatra, and Lucille Ball. 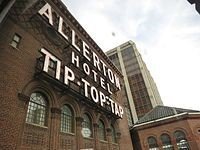 The Allerton underwent extensive renovation in the 1990’s and was designated a historic Chicago landmark.

Now, after its purchase by the Warwick Hotel chain www.warwickhotels.com, the Allerton is again being updated, including windows from Northern Architectural Systems that maintain the original design intent and provide unobstructed views and high energy-efficiency.

If you find yourself in Chicago, stop by the Warwick Allerton Hotel to see its reinvented interior that reflects influences from a classic era translated into a current and modern interpretation. And check out the great views through the Northern windows.